Both our churches are now re-opened for the purposes of

We extend a virtual welcome to folk from the parish of Shoreham, who may be joining us via YouTube whilst their Vicar is away.

Thanks to all those who have worked hard to make this possible.

All Church Buildings were closed in March 2020 when the lockdown began. After 5 May, churches remained locked but clergy and their households were allowed to use their church for daily prayer, and the streaming and filming of worship for social media.

The Rector wrote at the beginning of lockdown "I will endeavour to say Morning Prayer at Plaxtol 8.30am and Evening Prayer at Shipbourne on a daily basis, and I will celebrate Holy Communion at Shipbourne at 9.30am, and at Plaxtol at 11.00am on Sunday ‘on behalf’ of ‘everyone’. Prayers and readings will continue to be published on the St. Giles’ Church pages at www.shipbourne.com, and on the Facebook group page: ‘Plaxtol Parish’.

We continue to be the Church: a people of prayer and action.

Facing the Financial Black Hole in the Church’s Finances

The church relies on different sources of income: collections from services, fees from weddings and funerals, funds raised on special occasions such as the Summer Fete and the Harvest Supper. These have all ground to a halt, and there is simply no knowing when ‘normality’ will return. We may be facing a long period of time when social distancing remains the rule, and this is bound to affect our normal streams of income.

The most straightforward way to avoid the worst of these effects is to commit to regular monthly giving by standing order. If you already do this, many thanks! Amounts given are known only to the PCC Treasurers. Please use the following co-ordinates:

Another way you can help is by fundraising in lieu of the Summer Fete. Adrienne is making face-masks and inviting donations. Peter C is turning his new-found cycling into a sponsored ride and he is hoping to use the ‘Just-giving’ App to invite donations. Please think if you could make and sell cakes or jams, or chutneys or…………………………………………………………………………… The possibilities are endless, but every little will help!

Andy’s funeral is necessarily taking place under Government regulations and Church of England guidelines because of the pandemic. This means that attendance is strictly limited to family and friends by invitation only.

Margaret has asked me to publish the Order of Service on the ‘Plaxtol Parish’ Facebook group on the day, and looks forward to welcoming the wider community to a Memorial Service and Reception on Wednesday 28th October, which would have been Andy’s 77th birthday. Thank you for understanding.

Good Friday: the Rector doing our traditional walk carrying the cross between the two churches of the benefice 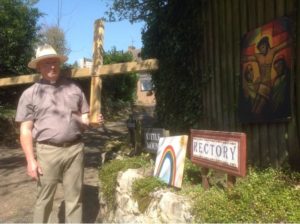 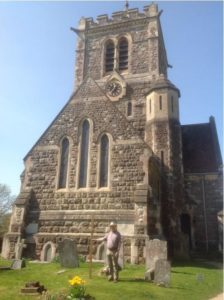 This renowned Passion Play was due to run this year, but the whole season has been postponed till 2022 because of the pandemic. A Meopham- and Eynesford-based group with whom Donna and I will be travelling now has up to seven places available for a week’s tour with McCabe Travel beginning Wed 31st August 2022. Please contact Jan Thompson if you are interested on [email protected] 01322-683062.

A Remembrance Service was held at Shipbourne Church on Sunday 10 November 2019. The service began beside the War Memorial, before moving inside the church. Shazia Khan-Bourne sounded the Last Post and the Reveille and Mrs Valerie Redman read out the Roll of Honour of those from Shipbourne who lost their lives in the Great War and in the war in Afghanistan. The Rector led the service and gave the address.

Harvest Supper 2019
The Barn of the Fairlawne Home Farm was the magnificent setting on Friday 11 October for the Benefice Harvest Supper, to celebrate the Harvest Festival. Long trestle tables were decorated with squashes and apples, and straw bales provided rustic seating. Guests arrived to the sounds of English folk tunes played on various accordions.  We all sung two harvest hymns, accompanied by John Young, Nick Ward provided a quiz and the Rector acted as our Master of Ceremonies.

Our thanks to the Fairlawne Estate for generously allowing us the the use of the barn; to James Sheldrick and his team for clearing and setting up the barn with tables and straw bales for us to sit on; to all those who provided lasagne, apple crumbles and salads, and apple juice; to the many people who set up on the day, helped with the serving and clearing up afterwards and helped with the bar. Particular thanks for the generosity of local businesses and individuals who donated prizes  for our raffle.
Special thanks also go to our organisers, Kate Symonds and Andy Doughty for such a wonderful evening.

The St Giles Summer Fete took place in sweltering heat on Shipbourne Green, by kind permission of the Fairlawne Estate, on Bank Holiday Monday 26 August 2019. Mr James Swartz of Fairlawne welcomed visitors and opened the fete. The Tonbridge and Sevenoaks Training Band played a variety of great music throughout the afternoon. Sadly the dog show was cancelled this year because of the heat. Visitors enjoyed the various sideshows - they included face painting, lifting bricks, throwing sponges at people in the stocks - and there was a range of cakes, jams, vegetables and other produce as well as the popular book and bric a brac stalls.  The raffle was a success again. Burgers were on sale from the new  barbecue and drinks were available from the bar. Kathy and her team were offering tea and cakes in the Village Hall.

Warmest thanks to all the numerous people who helped with energy and enthusiasm in running the stalls, setting up or clearing away, or who contributed prizes or produce, and in particular to Lindsay Miles and Viv Packer who organised the fete and made it such a successful day.

A reception was held in the Village Hall on Friday 1 November to thank all those who helped with the fete.

The window sills in St Giles Church were specially decorated by local organisations and gave an insight into the life of Shipbourne village in 1919.

A Commemorative Family Service took place on a sunny Sunday morning. White flowers of remembrance were left on the War Memorial to pay respects to the local young men who lost their lives in the Great War.

The service was followed by traditional games and picnics on the village Green, with adults and children taking part in egg and spoon races, a sack race, a 3 legged race and a tug of war.

Special thanks go to all the numerous people involved in organising the events over the weekend and making it a memorable and enjoyable occasion.

Hal and Lara Cazalet, Georgia Ginsberg, Timothy End, Tom Humphreys and Emily Ward presented a concert of words and music on 12 May, to remember the ending of the First World War. The music included songs written by Butterworth and Denis Browne, who both died in the war, and songs written at the time by John Ireland, Ivor Gurney and Frank Bridge. Hal Cazalet led the audience in singing a medley of the songs which became popular marching songs in the First World War and then introduced some of the music Jerome Kern wrote for Broadway musicals at the time, to words written by P G Wodehouse. The readings included poetry, memoirs and letters from Siegfried Sassoon, Wilfred Owen, Rupert Brooke, Vera Brittain and others. Hal Cazalet read a moving account by his great uncle, Victor Cazalet, of his experiences of life on the front line.

Proceeds from the concert go to St Giles Church Shipbourne Restoration Appeal and to the Royal British Legion.

On Sunday 10 February 2019 there was a Service of Thanksgiving at St Giles during which the choir sang a special anthem as a tribute to Sir Edward Cazalet. This was followed by a lunch to bid him farewell as our Patron of many years standing. Our new Patron, Francis Read, and the Rector thanked him in their speeches after lunch for all that he and his family had done for our village over so many years. Sir Edward in his reply recalled his family's long association with, and affection for, Fairlawne, St Giles' Church and the village.

The Roux's return
Albert Roux and Michel Roux Jr  returned to Shipbourne on Tuesday 5 June 2018 for the Roux Two dinner,  five years after their last dinner here in Shipbourne,  this time to celebrate the 15th anniversary of the Shipbourne Farmers' Market. This black tie event started with a champagne reception in the Church Room of the Chaser Inn, followed by dinner in a marquee in the garden.

Profits made from the Roux Two Dinner were split between the following good causes: